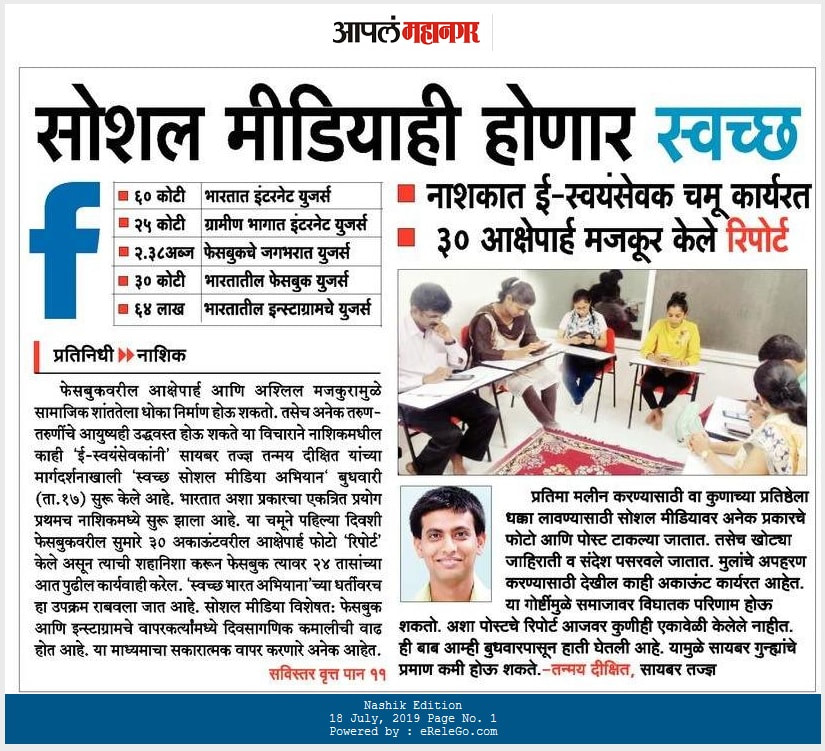 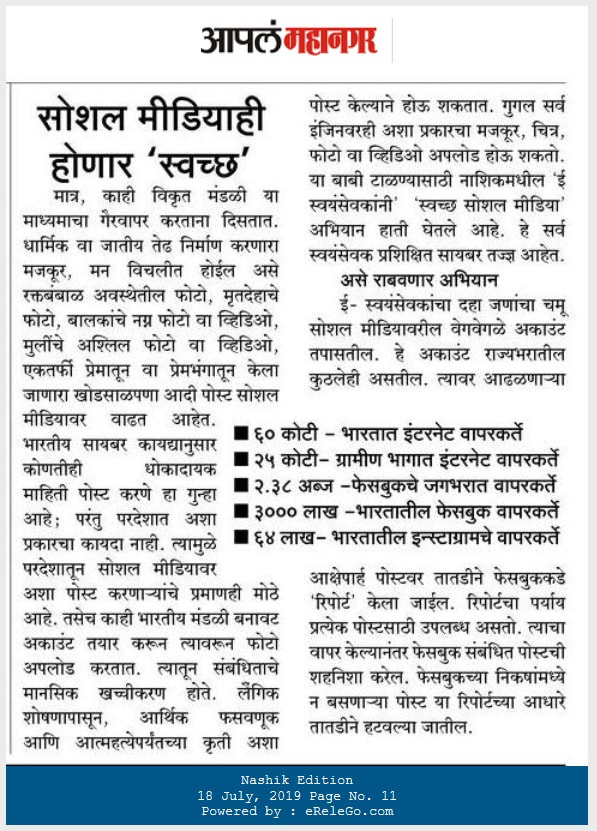 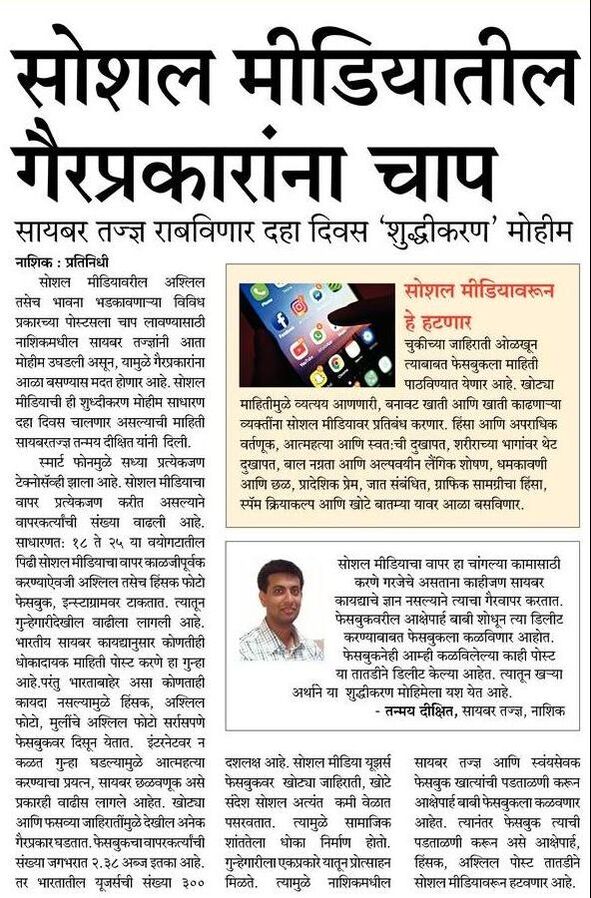 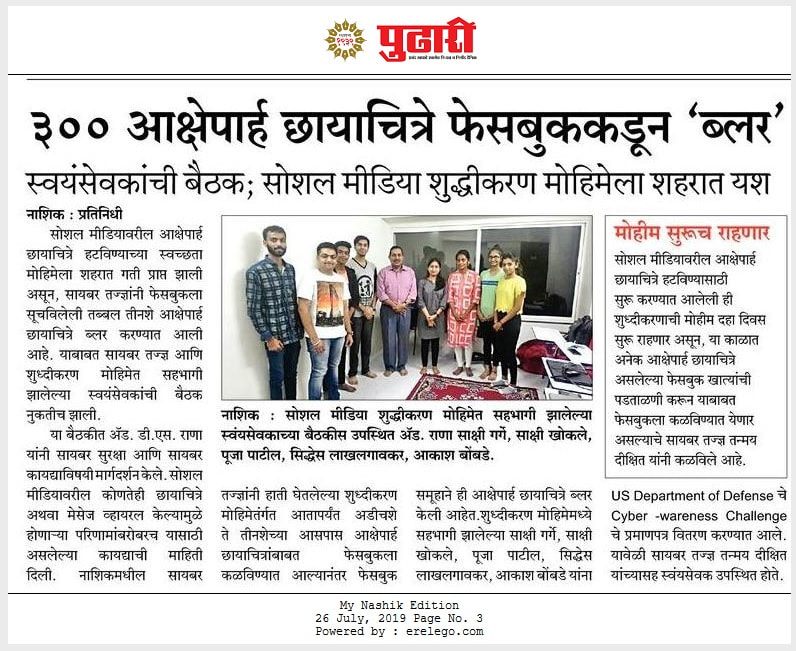 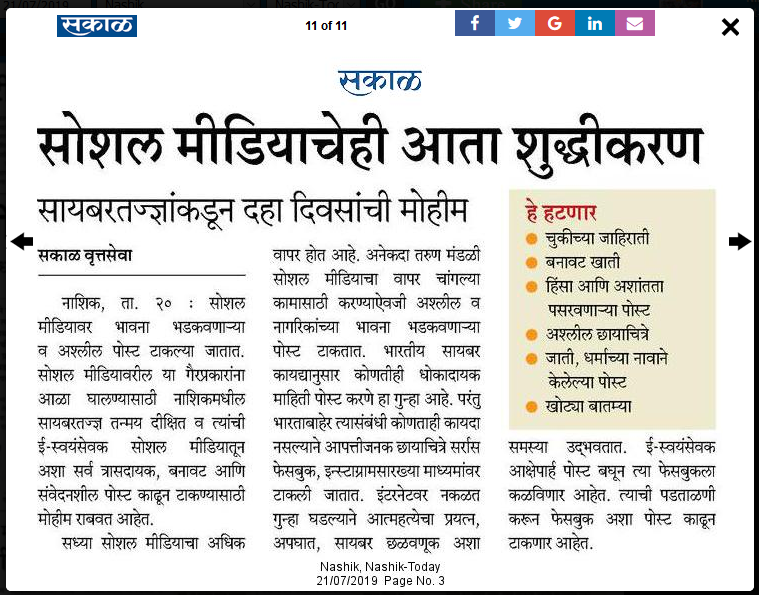 A social media campaigning will be launched by Mr. Tanmay S Dikshit, the Cyber Expert from Nashik in Association with Karmaveer Kakasaheb Wagh Institute of Engineering Education & Research, Nashik. As a part of social responsibility, where students will spot vulgar photos and various types of posts that provoke emotions, which will help prevent misconduct. This campaign will last for 100 days.
Currently everyone is techno-savvy due to smart phones. As everyone is using social media, the number of users has increased. Generally, youth of 15 to 25 age group, instead of using social media in right way they use it for uploading pornographic and vulgar photos on Facebook and Instagram. Due to this crime has increased. According to Indian cyber law, posting such dangerous information is a crime. But there is no such law outside India and because of this violent, vulgar photos, pornographic images of girls are rapidly posted on Facebook. Attempts to commit suicide has increased in youth due to unintentionally crime happening on the Internet and Cyber-bullying by them. Fake & fraudulent advertisements also cause a lot of misconduct. Number of Facebook users worldwide is 2.38 billion and in India, the number of users is 300 million. The cyber expert , staff from KKWIEER and cyber volunteer will verify the fake advertises, fake accounts and fake message on Facebook. This type of fake advertise, news, message etc are spread in very short time on social media by verification it will get noticed that such vulgar, pornographic posts are encouraged to share on social media. Therefore, such kind of post will be deleted from the social media in Nashik.

The fake advertisements will be identified and this will be informed to Facebook. Also, fake accounts will be removed from Facebook and social media will be prevented from it. Now, fake post, pictures, Child pornography and underage sexual abuse, cyber bullying and harassment, and fake news, messages will be stopped on social media and action will be taken on it by Facebook.

As social media is a necessity for this day and age,  but some misuse it because they are not aware of the cyber law. We will search offensive and fake accounts, posts, messages etc on Facebook and will report them to delete it from Facebook. We have previously reported to Facebook about some posts and they have taken immediate action and that posts are removed. In this way the campaigning will be successful to clean the vulgar and fake data from  Facebook by the students.
#letspurifysocialmedia  #Swatchbharatabhiyan